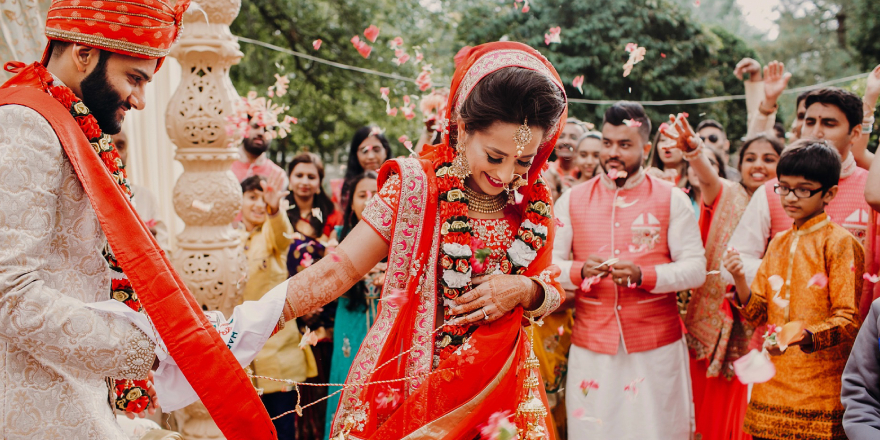 Explore More About : Unique Wedding Traditions Around The World

Lighting the sacred fire is the first step to conduct Hindu wedding rituals in a Hindu marriage. A mandap with a raised platform is first built. The bride and the bridegroom are made to sit on wooden seats. The sacred fire is then lit with ghee and pieces of special herbs. The spirit of Agni is then invoked with mantras by the priest to thrash the effect of evil eyes and bless the couple with prosperity, purity and transparency. During the rituals, the couple exchange garlands made especially from roses and jasmines. In a Hindu wedding, these religious rituals help to build a healthy bond between the families and the newly married couple. The Hindu wedding rituals also look forward to a soul to soul connection and get involved in each other’s life with love.

The significant part of a Hindu marriage happens at the end of the Hindu wedding rituals. End of the bride’s saree-pallu is tied as a knot to the shawl or the towel draped from the bridegroom’s shoulder. With their little fingers of their right hands locked together, they will go around the sacred fire. While they take their seven steps around the sacred fire, the Hindu priest who conducts the marriage chants seven vows and blesses for a long-standing marriage. With every step, they are asked to feed the sacred fire with turmeric rice, which represents prosperity in the new life they start together. It is believed that this ritual strengthens the bond between the couple in the long run. The Hindu priest blesses them with specific mantras that bless them to have a happy married life with prosperity and live in harmony forever. The mantras chanted during rituals bless them to be happy eternally. The Hindu priest blesses them after conducting the rituals to have all comforts in life.