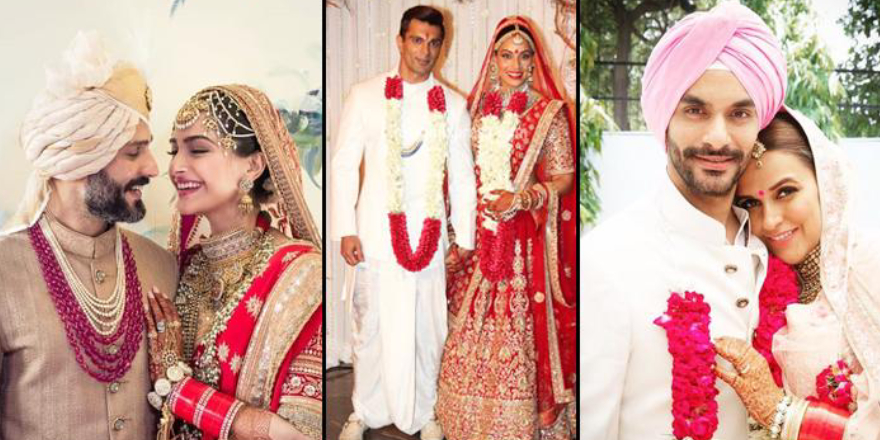 It will be a grand surprise or probably a shock when we find someone on earth who is not familiar with the likes of Virat Kohli and Anushka Sharma. The duo were infamous and in the eyes of the media since 2011 when both of them featured in a commercial television advertisement. The couple shared an adorable bond since then, and Virat also praised his wife’s support and her Bollywood success on Twitter which proves the strong bond between them. The couple decided to tie the knot on December 11, 2017, in Italy with close guests and the event was a grand success and also one of the memorable events of the year.

When it comes to celebrity wedding stories, no one can ever miss the likes of Yuvraj Singh and Hazel Keech. People who know what Yuvraj did in 2007 and 2011 ICC cricket tournaments will surely know about the ups and downs in his life. The media also added that it took Yuvraj a long time to befriend Keech and also Yuvraj had link-ups with many other girls like Preity Zinta and Kim Sharma. It was the British-Mauritian model with whom he tied the knot with. People who are not familiar with the Hazel Keech must not have seen movies like Bodyguard and Billa.

We can call this wedding as one of the journeys of two unknown wanderers. The Indian cricket team spinner Harbhajan Singh had to work hard and smart for ten months to meet Geetha. Harbhajan started liking her from the song in the movie, “The train”. The couple decided to marry in October 2015 in Punjab, which was a grand celebration of that year.

4. Zaheer Khan and Sagarika Gatge
Who can forget the gorgeous girl from the movie “Chak de India”. Sagarika Gatge moved up to Zaheer during the wedding of Yuvraj, and since then the couple were in the spotlight. The couple married on April 24 which was legally registered on November 23 2017. Zaheer Khan, despite being retired from all formats of cricket, is still remembered for his swing devastation. He was also the leading wicket-taker during India’s winning campaign in ICC cricket world cup 2011.